As early as the 1700s, the Okanagan native tribes knew of a water beast living in what is today known as Lake Okanagan. They called the creature N’ha-a-itk, meaning "sacred spirit of the waters" and their Native superstitions demanded certain traditions before entering N’ha-a-itk’s domain. One of the traditions was apparently the ritual sacrifice of a small animal as a peace offering before crossing the lake. Tying their horses behind their canoes, they would paddle out to where they believed the serpent lived in a cave beneath the water and make their offering, thus insuring that their horses would not be dragged under and drowned by the monster.

Early area settlers also reported sightings of N'ha-a-itk and they patrolled the shores to protect their families.

In 1890, Captain Thomas Shorts was steaming on the lake when he saw a finned creature about sixteen feet long with a head like that of a ram. The creature promptly disappeared when he turned his ship in its direction, and virtually no one believed him when he reported it. But other reports soon followed at two or three a year, and people began to examine the lake in more careful detail. The local population fervently believed in the creature’s existence. They called it Ogopogo and named the island, Ogopogo Island, which later officially became known Rattlesnake Island.

Some scientists believe that the Lake Okanagan "resident" must be a form of primitive whale, Basilosaurus cetoides, a prehistoric whale that lived during the Cenozoic era, about 35 million years ago. The general appearance of Basilosaurus tallies almost exactly with the loglike descriptions of the creature known locally as Ogopogo. The creature is most often described as being one to two feet in diameter with a length of 10 to 20 meters (30 to 60 feet). The head has been described variously as being horse or goat-like. One characteristic often repeated by many of the people who have seen "him" is its resemblance to a log. It is reported to be able to move with astounding speed but many sightings in calm weather have been made of the creature apparently feeding on either fish or aquatic weeds. People who were very close, between 50 and 100 feet, reported seeing fins or feet on the creature. 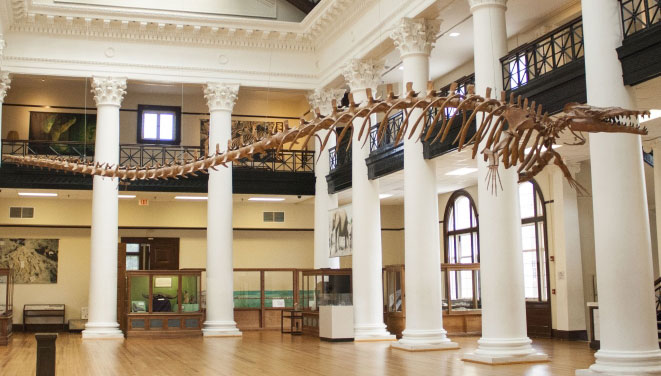 "The Talk of the Town"

Although Ogopogo is not yet as world-famous as Nessie, the Loch Ness Monster, the Okanagan "lake monster" has had its share of international press coverage, and even more so over the last several years. "Lake monster" hunters from all over the world have visited Kelowna and there have been numerous reported sightings. Some people claim that there have been more sightings over the years of Ogopogo in Lake Okanagan than of "Nessie" the Loch Ness "Monster in Scotland. A famous drawing which has often shown up over the years is of two people in a canoe being chased by the "Monster of the Lake", as shown on this page. According to reports, this drawing is from circa 1872.

In a book called "Ogopogo: The True Story of the Okanagan Lake Million Dollar Monster", author Arlene Gaal tells of how a Vancouver Province reporter named Ronald Kenvyn composed a song which parodied a popular British ditty which included the following stanza:

His mother was an earwig;
His father was a whale;
A little bit of head and hardly any tail-
And Ogopogo was his name.

The name Ogopogo stuck and the original Native name N'ha-a-itk was replaced by the anglicized version of the name. 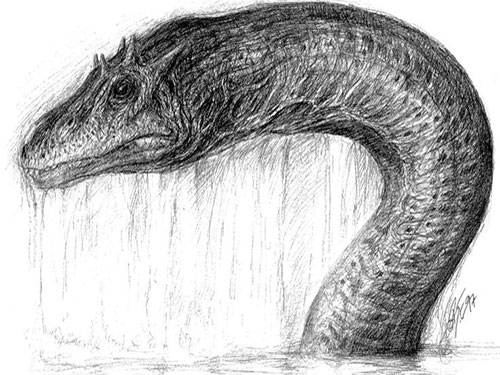