MOST RECENT REPORTS OF SIGHTINGS

There were a great number of reports of sightings between August and September of 2018, as well as during the Fall of 2019. There were not many reported in 2020, but there has once again been a reported sighting in April and May 2021, with pictures.

To read more about the many reported sightings by residents and visitors over the years, click here.

We launched the boat and headed over to the area and sat around for 15 m or so to see if anything would appear again. As i said it was flat calm and no boat wake looks like that!

The big Wakeboard boats are designed to leave a large wake behind which may appear to be humps moving along in the water which I have seen many times and I could see being mistaken for something swimming in the water and even make a great photo - this wasn't it! We estimate that it was maybe 12 - 1500 feet off shore. I’m glad my wife saw it as well or I may be doubting what I saw! I was trying to write off this sighting as something normal but couldn't come up with an explanation. The fact that this activity started and stopped twice along with the splashes leaving only flat calm water is the part that was most compelling.

Unfortunately - no pictures or video. I kept going over the event in my mind and decided to call Castanet to see if they had any other sightings which they said no but took my name & number just in case - to corroborate someone else's story. I didn't want to be interviewed as just another one of "those" sightings which I always had been skeptical of. I decided to Google Ogopogo sightings - just to see if there were similar sightings to ours and I came across the Ogopogo Quest website - so here is my report for the records!
Larry S. 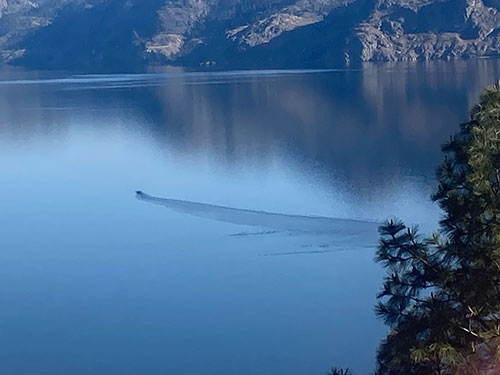 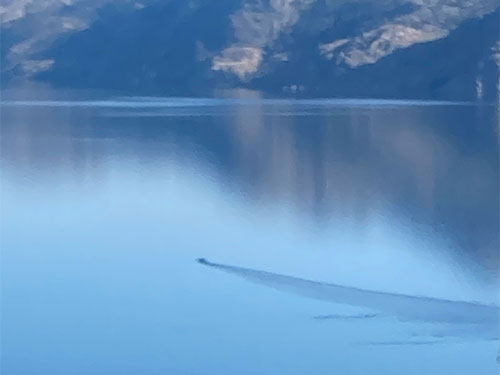 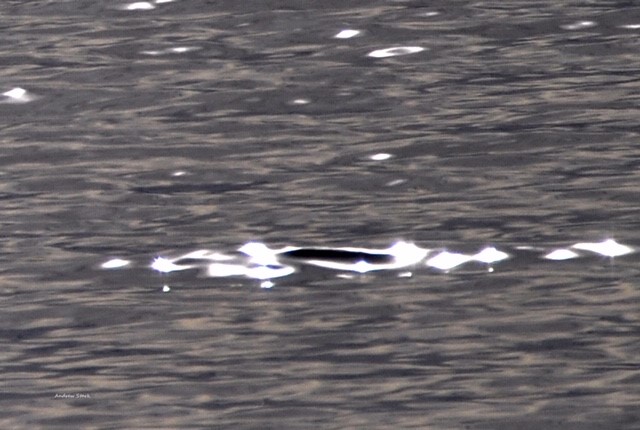 Andrew Stark is an avid photographer who lives in a lakeside condo complex south of the Eldorado Marina off Lakeshore Road. He took the following photos around 4:15pm on April 6, 2021, from his patio overlooking the lake. His estimate of distance was about 300 meters towards the southwest. The object stayed visible for about 2 minutes. 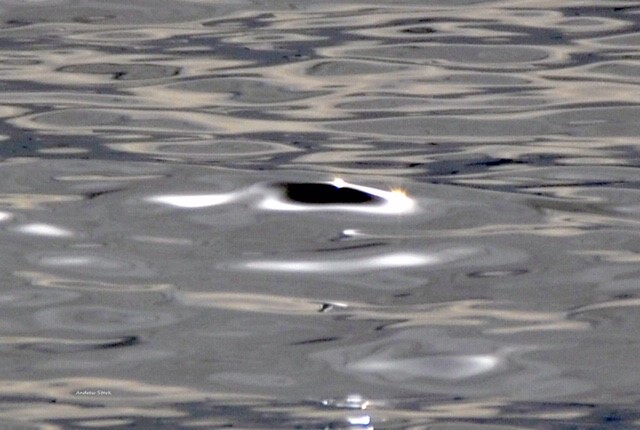 Pictures provided by Susan C. from Fintry.
"I was kayaking with my friend this past Sunday [September 8, 2019] on Okanagan Lake towards James Grant Island and all of a sudden we both saw this wave coming towards us . The lake was so smooth, quiet and mirror like. No boats were around us nor had passed us and it was quite calm. Then we both saw this long wave come towards us out of nowhere. We didn’t see any head but this wave. She said she felt a bump under her kayak. As it passed us it just disappeared. Our husbands were at the Fintry community beach and watched this pass us. My husband described it as a funny wave moving down the lake almost something large just below the surface." 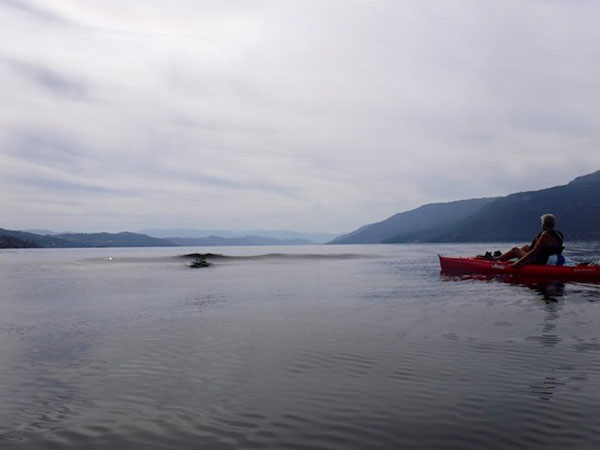 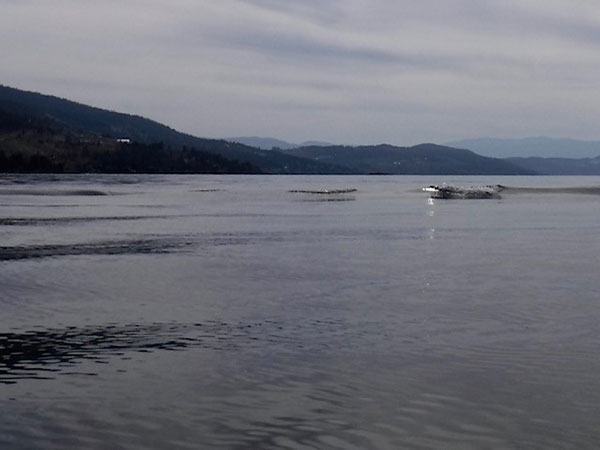 Story reported to this website by Kennedy H., on September 2nd, 2019.
"While we were going over the bridge into Kelowna around 6:40 am, we saw weird movement in the water . We pulled over to take a second look but we were unable to capture a photo. It appeared to be multiple scale-like humps coming out of the water and slowly rotating . Around those lumps were multiple larger waves following the creature. We are unsure if it was due to different temperatures of waters or if we have seen the legendary OGOPOGO."

Pictures snapped by beachfront condo resident February 2019
Wendy Steciuk was looking out her living room window of her lakeside condo located south of Mission Creek near the Bluebird Road access to South Beach, at about 4:45 pm on February 9, 2019, when she saw something on the lake. She grabbed her camera which she always has handy due to previous "Ogopogo" sightings, and snapped these pictures from her balcony. She took several pictures and the object was definitely moving. Her camera view finder indicated that the "subject" was about 130 meters away. 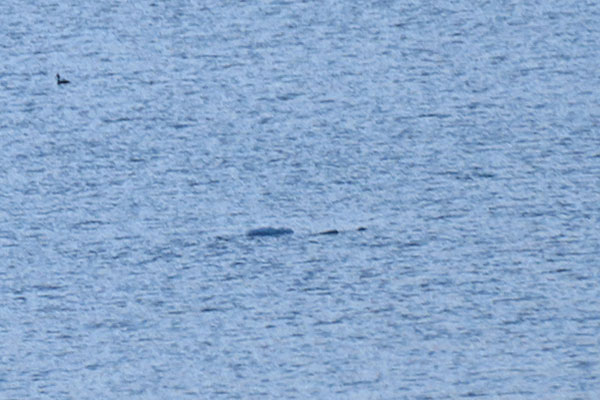 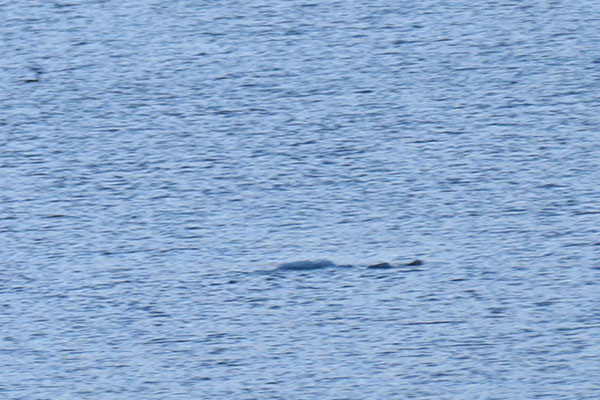 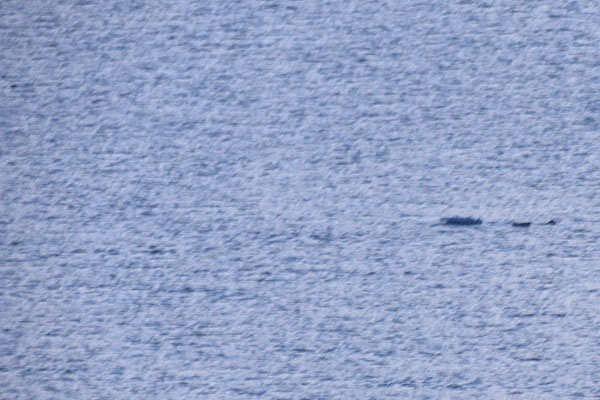 Story reported to this website by Katrina T., from Peachland, British Columbia, on September 30, 2018.
"On September 30th, around 4:00pm in Peachland, I saw something swim from the middle of the lake then disappear when it reached the shore. It was making huge splashes. My phone was almost dead or I would have taken a video. I took a bunch of pictures and you can see where it goes, and the caves. Right after I saw it, 5 boats came over investigating.

Story reported to this website by Martin from Vancouver, a contractor working on new highrise condo in Kelowna. This was the third possible "Ogopogo sighting" reported in less than 3 weeks, with more reports coming after this one!
" Sept 18, 2018 - I was working on the 22nd floor of a new highrise condo in Kelowna. I am working from out of town so I was taking in the views at approx 9am this morning. I noticed that there are not many boats in the water on a weekday and how calm the water was. I saw something in the water today that is very hard for me to explain. It looked like a giant snake breaching out of the water (barely) but enough to make pretty big waves in and around it. There were no boats in the area, and the water was very, very calm. I told a co-worker to look out at the water in the area in question and my co-worker was looking and seeing what I was seeing and was also dumbfounded. I still do not know exactly what "it" was, but after doing some research on the internet the possibility of something very large living in the very deep and extensive waterways of Lake Okanagan is very possible...This "it" must have been approx. 30-50 feet long breaching out of the water for approx 2-3 minutes. I tried grabbing my cell phone out of my pocket to get a picture or video of this disturbance in the water, but by the time I got it out of my pocket, it had submerged and the waves almost instantly vanished and the water went calm. It is very interesting that there was a sighting last week near Bear Creek Park when MY encounter this morning was not far from there at all. Rough bearing from Google Maps is: 49°53'13.4"N 119°31'14.7"W. It was approx. 200-300 meters from the shore and definitely worth investigating further. I have always had a hard time believing in something that I have never seen with my own eyes...But after my experience today, I honestly can say that there IS something in these waters. They find new species all over our planet everyday and much of our planet has not been fully explored. I wish someone could get some drone footage of this area to possibly get a glimps and put all the speculators to rest.

I know there is something down there. I just find it very interesting that the Sighting last week by the man with the video was at Bear Creek Park which is not far at all from my sighting...Very similar description. There MUST be something. Would love to purchase a Drone and go up and down that stretch to get some concrete evidence.
Martin Z." 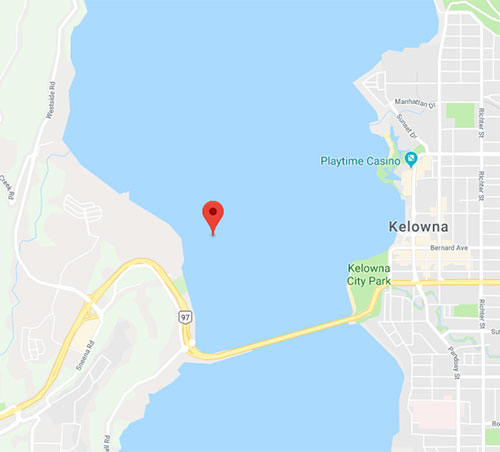 Story reported to www.ogopogoquest.com by Andrew, a local photographer, in September 2018, along with the incredible picture that we show on our home page and above.
"I was sitting on the shore of Bluebird Bay on a quiet Sunday (September 9, 2018). I am an amateur photographer and I love catching images on the lake. A large moving object suddenly reared out of the lake and moved quickly from left to right in my view. As you can see in my picture, there is a boat in the distance toward Squally Point, but nothing else, certainly no boats large enough to kick up such a wake. There also was no tremor recorded in the Okanagan September 9th (18) that would kick the lake up as I saw." Andrew S, Kelowna 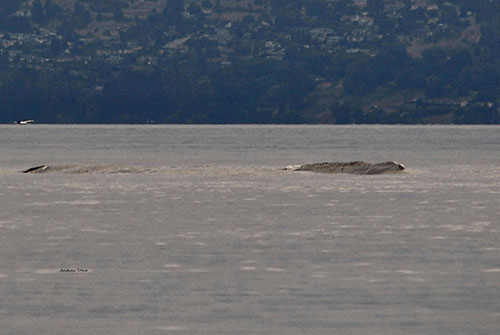 Story reported to this website by Tracey W, a longtime Kelowna resident.
"My husband and I were driving across the bridge this past August 24th (2018)to go for dinner with my sister and her family into Westbank. Just as we were nearing the end of the bridge headed towards the westside, I looked on the right hand side [which would put it on the side of the bridge towards the downtown area of Kelowna] I saw something long swimming in the water – it looked like it was coming in and out (up and down). I yelled at my husband to slow down and explained what I was seeing ,as I was excited. My husband just saw the waves being made before we came off bridge – we were going to try and pull over at the top where all the billboards are but traffic was too busy. I have lived in Kelowna for 30 years and watch the lake like a hawk whenever we travel to Penticton etc…. I was so excited that finally I saw something. It was not much after this that the two gentleman were on the news [they were able to video their sighting from Bear Creek Provincial Park] and I thought how funny we haven’t heard much about sightings and just as I see it, someone else did too.
Tracey M, Kelowna.

The following story was reported on Global News as well as picked up by a variety of media around that time.

"There is much to be told in this story about what Halbauer and his brother Keith saw at the water’s edge near Bear Creek Provincial Park last Friday (September 7th).

There are compelling hints at the existence of the Okanagan’s legendary lake monster. "When you’re sitting on the beach on a sunny day, you don’t expect to see a dinosaur coming out of the water," Kelowna’s David Halbauer told Global News. We were all just stunned."

A long and dark snake-like creature emerged from the water about 100 metres offshore, Halbauer said. "I don’t think I could put my arms around it," he said of the creature’s diameter. "It rolled up and down as it went in the water. Another lump of the same thing came up about five metres in front of it." He hastily grabbed his cellphone and tried to capture the amazing sight in front of him on video, but said a glare made it impossible to see exactly what he was recording.

"“I don’t know what it was,” his brother Keith, visiting from Edmonton with his wife, said. “But then I saw waves behind it. The rest of the lake was calm. So, it’s pretty neat."

It was about 15 metres or 50 feet long, the men told Global News on Tuesday night. In the video, Halbauer can be heard describing it as 40 feet long. "Like a dinosaur," Halbauer said. "It was like a giant snake."

(*note: this sighting took place 2 days before a sighting by Andrew Stark of Kelowna, an amateur photographer who gave us an incredible picture of what he saw) 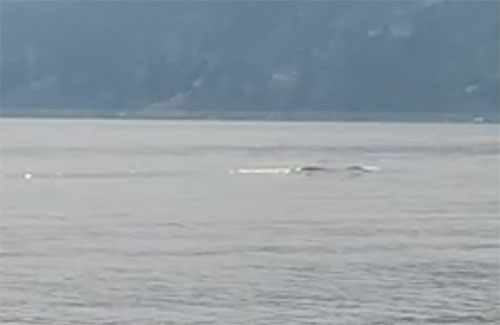 Still image taken from video as published by Global News